Janet Ness: A Memory Shared while Hiking for Valley Hospice 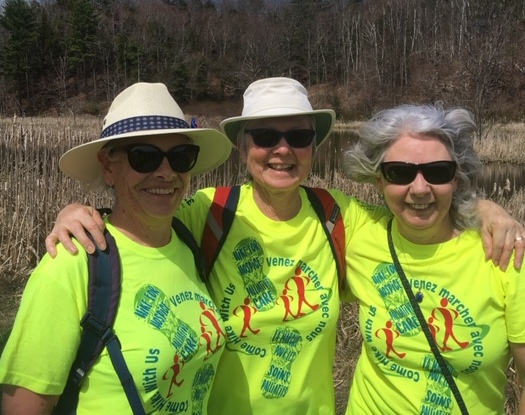 Janet, whose mother died in a hospice in Grimsby, Ontario, says the Hike for Valley Hospice fundraiser does more than raise money and awareness. “The hike also gives those of us who’ve had loved ones experience the care and comfort of a hospice setting the opportunity to share their memory with others,” says Janet.

Janet’s mother was diagnosed with cancer at 92 and chose not to have aggressive chemo or surgery.

“During that time, our ‘family’ grew to include the staff and volunteers at the McNally House Hospice who supported us in her journey,” says Janet. “My mother’s medical and social needs were catered to at any time of the day. Her private room was comfortable, and her bed could be wheeled outside to savour the sun and warmth – creating a sense of harmony.”

Over $23,000 was raised at the Hike to enhance private patios for each of the 10 bedrooms at the new residential hospice now under construction in Kentville NS.

Janet says hospice care also provides restorative breaks for loved ones. “This helped us to be present with my mother in a deep and meaningful way as we said our goodbyes.”

A participant at Sunday’s hike, Janet had previously been on the Hike’s organizing committee, supporting initiatives that will enhance the future of Valley Hospice care.

“The funds raised at the Hike for Hospice is crucial to the Valley Hospice Foundation – and now the Hospice itself,” says Janet Ness. “It raises awareness about what a hospice is, the fact that this option even exists, and how it fits with our end-of-life wishes.”

“I truly hope and expect many more people will experience the gift of a peaceful death when the Valley Hospice is a reality.”